...I've been slacking off. Well I would have been if I wasn't so busy! I got a bunch of cleaning done this week + I have half of my special orders done and posted! But I have been neglecting my blog. Bad blogger! No cookie for you! Anyway since it's rainy (or at least gloomy) today, I can focus on finishing my special orders and getting a blog update ready for tomorrow. :) I guess since I have a minute I'll give you a quick update of what I've been up to.

First, I did a special order striped fish and had a bunch of blue swirly clay left over, so I made another starfish magnet!

I think he turned out cute. I have another fish to make today in pink, so he might end up with a sister. :) What else have I been doing? Oh, I took a bunch of pictures of my stuff and my brother Tony's (DigitalMushroom) stuff. I'm not sure when he's going to post his new pieces though, since at the moment he's finishing up his senior year at Rowan University. But I'm sure once he's done with school, he'll have a lot more time to work on his shop! :)

One of the pieces I took new pictures of was my beehive pincushion. If you've been following me for awhile, you might remember the during pics from this piece waaaaaay back in August of last year! It took me a little while to figure out how I wanted the finished piece to look. I decided to go simple instead of adding to it. So here it is! 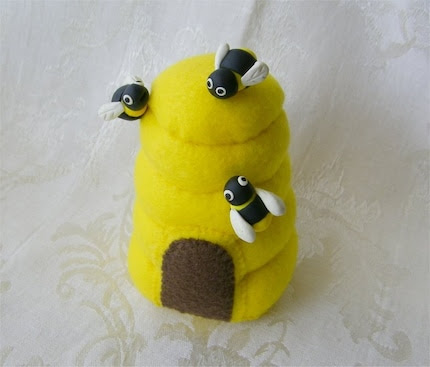 I like the bees. :) They came out cute! Though I noticed while I was fixing the pictures, that I forgot to give them stingers. So I guess they are pacifist bees. :)

Since my kids have been outside in the gorgeous weather lately, I've also been working on my sewing. I started on a new pincushion.

It's a log! Well it's going to be a log. Right now it looks a little strange. I think for the pins I'm either going to do three mushrooms, or a mushroom and some bugs. I'm not sure if it will be all brown, or if I'm going to sew some moss onto it. We'll have to wait and see. :)

The other piece I'm working on is a Harry Potter shield ornament. It's the Hufflepuff house shield. And for those of you who don't know what I'm talking about, I've included a picture of the actual shield (minus a couple of slices that I cut out). You can see the whole shield, without the cuts, here.

Once again, I have been working on this one for a long, long, long, long, long time! This one has given me quite a bit of trouble, but I'm almost done! Just have to finish the lettering and a couple other small details. I had done a Gryffindor ornament first, but that one only took a week or so to finish.

So that's what I've been up to. Plus cleaning, and watching the monkeys...I mean children. :D Hope you've been productive lately. Have a great day!
posted at 10:44 AM