An Apple a Day

Well even if I do eat an apple today, I still have to face the inevitable: taking all three kids in for their check-ups! This should be fun and exciting. In the past I've usually taken the twins together, and the youngest by himself. I've never had the pleasure of taking them all at the same time. I'll let you all know if I survive. :) Anyway I thought today would be a good day to do a doctor themed mini treasury. Enjoy! :)

Who would win? It's the question of the ages. Sure "Where do we come from?" and "If a tree falls in the woods, would anyone hear it?" are good questions too, but this one is at the forefront of geek discussions everywhere!

So who would win in fight between pirates and ninjas? Well that depends on who you ask. :) I've always been a ninja person myself, though pirate ships are really cool too. It really comes down to stealth and finesse vs. power and fearlessness. Ninjas rule the night, pirates rule the sea. Ninjas have cool pointy (and ridiculously well made) weapons, pirates have swords and guns. And while ninjas train their whole lives to develop their skills, pirates get to get drunk on boat in the middle of the Caribbean (among other places). :) So who do you think would win? You can cast your vote in my poll on the sidebar and we'll see is triumphant! :)

In all honesty I have no idea what got me thinking about pirates and ninjas, but it did lead me to create two really cool new Christmas ornaments! :) The first one is a pirate flag. 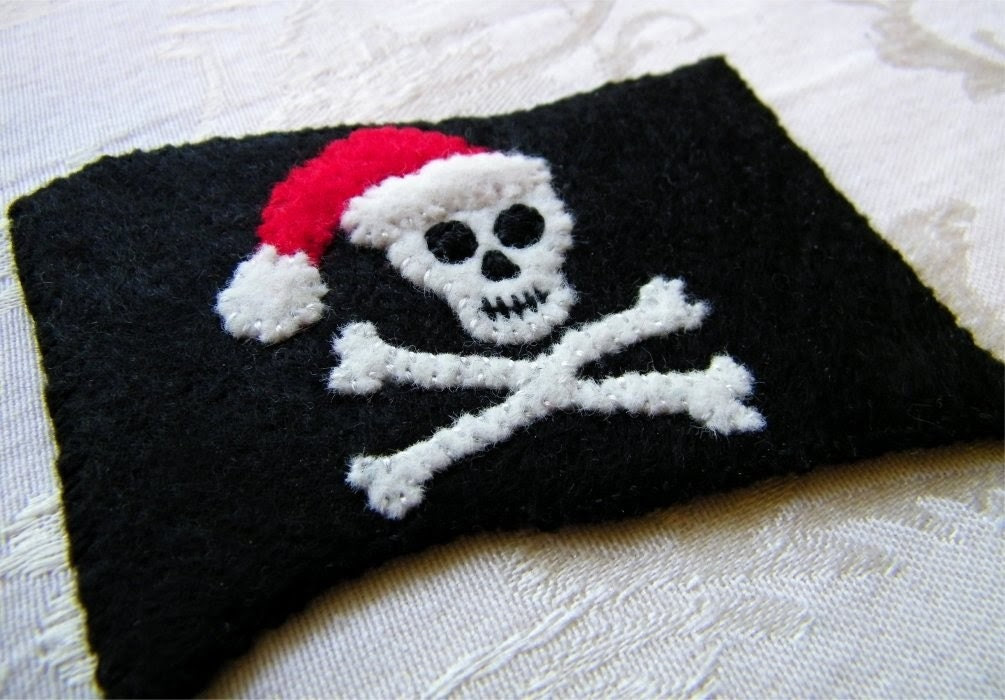 The perfect ornament to add some Yo Ho Ho to your Christmas tree! ;) The second piece is ninja related. 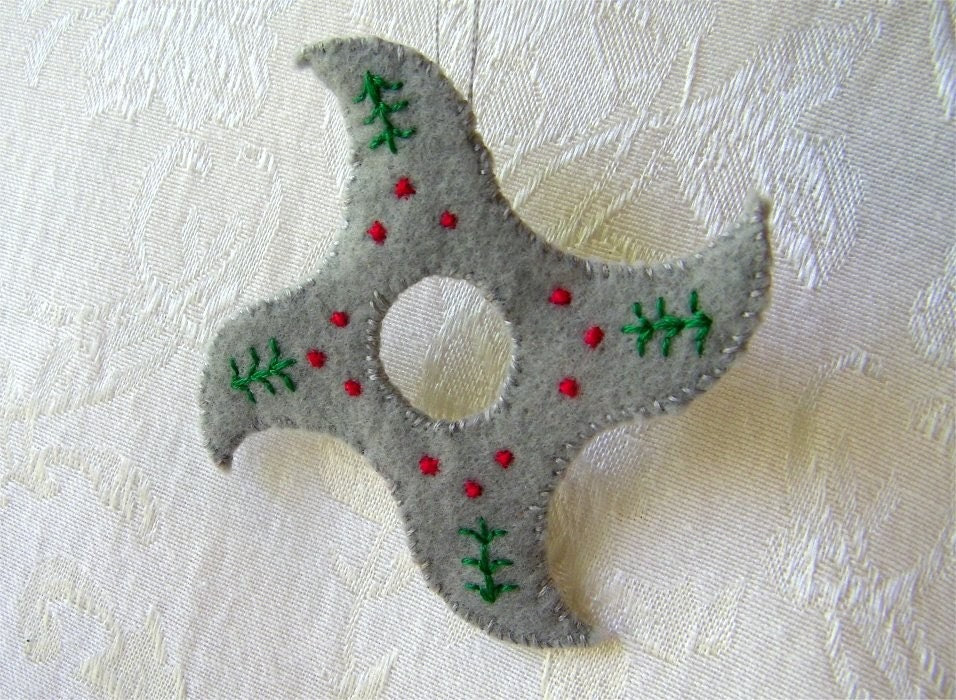 This would make the perfect Secret Santa present! And since there are so many awesome ninjas and pirates on Etsy, I made a treasury in honor of them too! 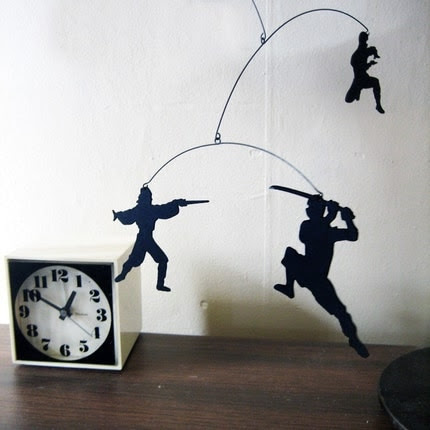 Have an exciting day! :)

They are my husband's triple ginger cookies! And they are soft, chewy, and delicious! I could probably eat two dozen of these without even trying! Not the there is anything wrong with Christmasy cookies, especially gingerbread men, who are as much fun to make as they are to eat! I actually have a couple of gingerbread Christmas ornaments in my shop right now and this little guy is going to be joining them very shortly. :) 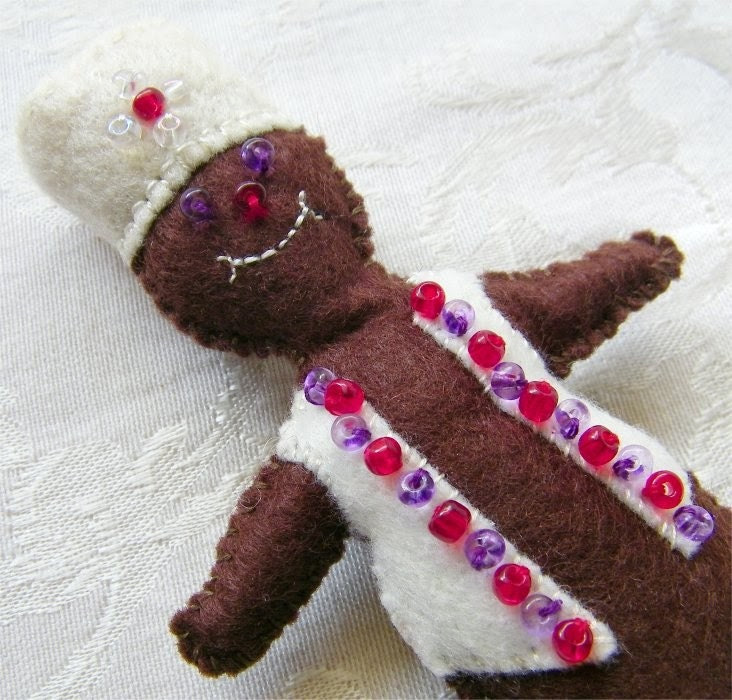 He started out as a plain gingerbread man, but something about him reminded me of the Nutcracker Suite, and he ended up dressed like a Russian dancer. I think he looks very handsome, and very tasty! :)

So since this weekend I seem to have ginger on the brain, here is a selection of ginger, Etsy style! Enjoy! :)

Have a sweet day!

Let's see...what have I been up to? Oh yeah! I posted a bunch of stuff in my destash shop (SpringToDecember) yesterday. I found a bunch of embroidery items that I wasn't using and figured I'd pass them on to someone who needed them. :) I also found some extra beads from last Christmas. 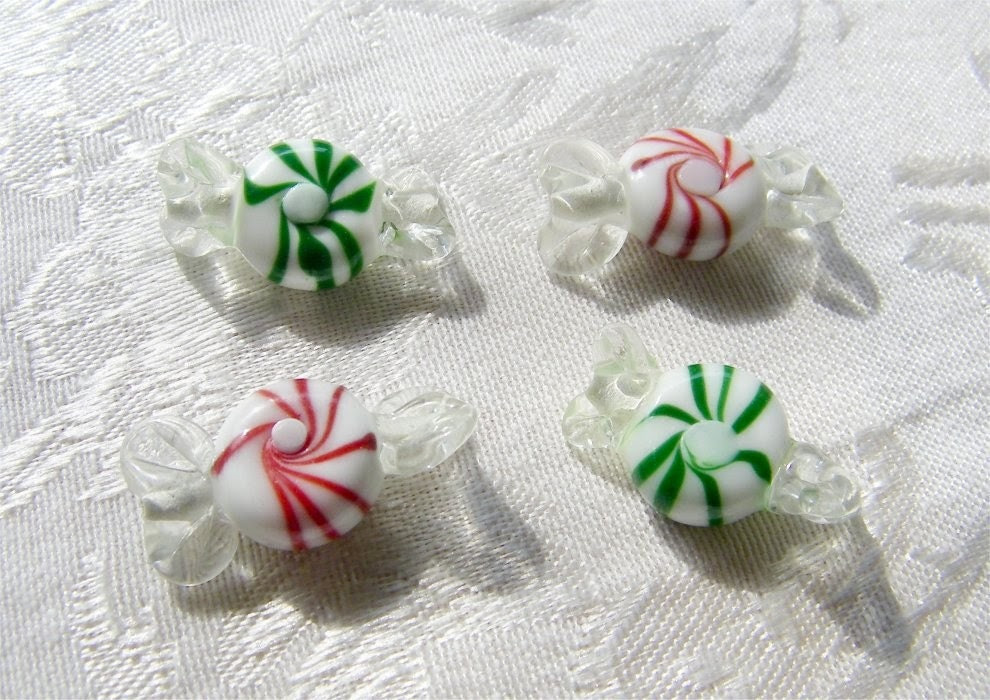 Hmmm...what else? Oh while I was digging around, I found some miniature dollhouse Christmas ornaments, that I had when I was growing up! I don't know how they ended up in my sewing box, but since I don't have a dollhouse anymore, I figured I'd post them. 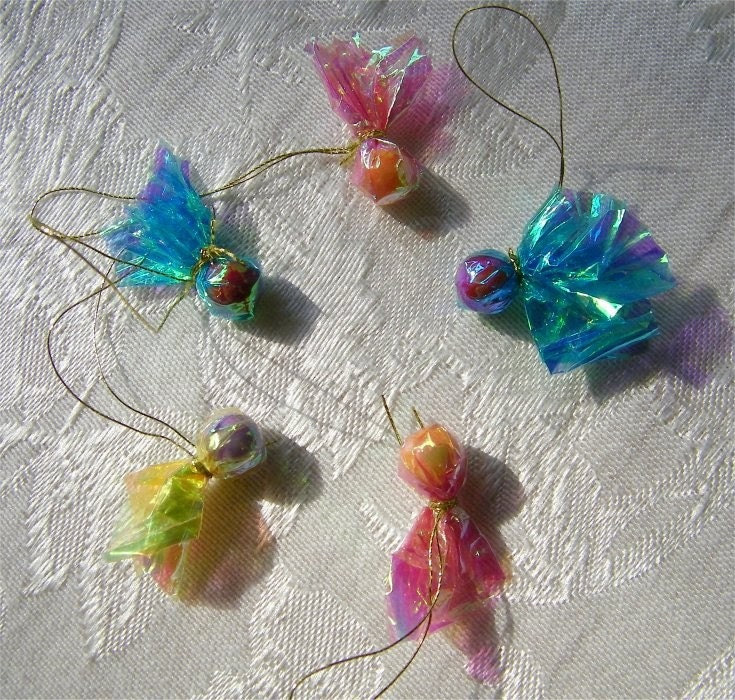 I hope somebody gives them a good home. :) I also listed a new piece for my brother Tony (DigitalMushroom). 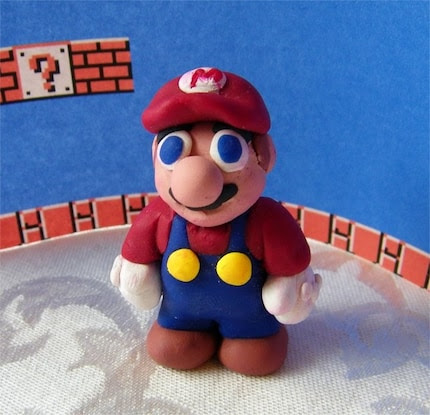 He also made a Super Mario treasury to go with it! Check it out here!

I'm currently working on a gingerbread man felt ornament, but I don't have any pictures to post yet. He started out as a plain gingerbread man, but he has evolved into a Russian gingerbread man. He is turning out really cute! I'm hoping to finish up today and post a pic either tomorrow or Sunday. Have a great weekend everybody! :)

Hungry for a Sundae

I don't know what got me thinking about ice cream, but I have been craving Neapolitan ice cream lately. :) When I was younger, my mom used to buy us these huge white plastic gallon tubs of cheapo ice cream (there were seven of us). The ice cream was good and afterwards we could use the tubs to put our toys in. I think they had rainbow sherbet too; that was my brother Steve's favorite. :) But my favorite was the Neapolitan! It was fun cause you had so many combinations you could get! You could have all three flavors, or just one, or maybe just two. My favorite was vanilla and strawberry. :) I remember it was always best if the two flavors you wanted weren't touching, cause then you didn't have to worry about getting some of the third flavor mixed in with your two favorites! :) So, in honor of the 90 degree weather and memories of drippy ice cream cones, today's theme is Neapolitan ice cream!


Oh and I also did a yummy treasury called A Neapolitan Summer, check it out! Have a sweet day! :)

Yesterday was mint day at my house. First I took some pics of a mint plant I got from my parents house.

Once long ago I planted some mint in a makeshift garden in my mother's yard. After a couple of years, my mom decided the garden was too much work, so my dad cut it down and planted grass. Unbeknownst to us mint is a weed and no matter how many times my dad tried to cut it back, he could never get rid of it! :)

A week or so ago i decided to see if there was any of the mint left in the yard. Sure enough, I found a nice piece growing right next to the air conditioner! So I pulled it up and I'm going to plant it in a hanging planter on my new porch!

I also got two candy cane felt ornaments finished and posted in my Etsy shop. I did something different with these ornaments: I used satin ribbon as an accent! I think they came out really cute. :) So I thought today I would do a theme of red and green mint! Enjoy! :)

Even though lately the temps around here make it feel like the middle of July, today is in fact the first day of summer! And the beginning of summer around here always means two things 1) school is out 2) the carnival is back! :)

Every year after the last week of school the carnival comes to town! There's rides, games, food, and fireworks! I like going on the nice gentle rides, like the merry-go-round, but my sister and brother were always the ones to go on the scary rides! Of course my favorite part is the fair food. Where else can you get deep-fried cookies and candy bars, nevermind the hot dogs, cheesesteaks, funnel cake, and (my personal favorite) cotton candy!

The first date my husband ever asked me on was to the carnival. :) He agreed to go the ferris wheel with me even though he was afraid of heights. It was too cute. :) Summer means a lot of things, but the beginning of summer will always be carnival time to me! I hope you enjoy this carnival themed mini treasury! :)


Happy first day of summer everyone! :)

Oops! I almost forgot! I also did a treasury to go with this post. Check it out here!

It was another busy weekend in this neck of the woods. Friday night was my twin sons' and my nephew's birthday party. They were born almost exactly a year apart, so we do all three birthday parties the same day. :) I made them a train cake, it turned out really cute!

There's some close-up pic of the cake in my Cool Cakes & Cupcakes set on Flickr. I love the way the engine turned out. :)

I also did another yard sale this weekend. This time however, I forgot to use sunscreen and now my nose and the tops of my ears are soar. :( But we sold more stuff this weekend, so it wasn't a total loss. :)

Best of all, I finally finished the Ravenclaw ornament! :D 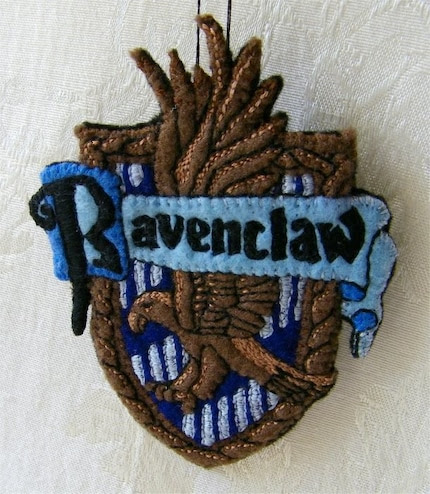 You can see how I made in my In Progress Photos set. I'm thinking about doing the Hogwarts Shield as well, but I think it might be too detailed to do in felt. Maybe I'll try it clay. Hmmm...something to think about. :)

That's it for the moment. Hope you all had a great weekend and a Happy Father's Day! :)

In honor of my father and husband, who are both major computer geeks, here is a mini treasury of old school computer gadgets! I hope you both have a great year and Happy Father's Day! I love you! :) Now go do something fun and relaxing, you deserve it!


Wishing all the dads out there a safe and happy Father's Day! :)

Today is Etsy's 5th birthday and in their honor I have put together a Happy Birthday mini treasury! I've been on Etsy for almost a year and I love it! I wish them much success and happiness in the future! Thanks for all you've done for us and keep up the good work! Enjoy!

Oh and I almost forgot! One of the items in this mini treasury is something from long ago in Etsyland (all the way back from 2007!)! Were any of you around back then? Or have you been here even longer? Let me know in the comments! :)


I hope everyone has a happy day! And for all of you who are going, enjoy the Etsy Craft Parties tonight! :)