We saw fireworks Friday night! :D I love fireworks! It was so much fun! We sat far enough away that it wasn't loud enough to scare the kids, and they LOVED it! But, why do we have fireworks on the 4th of July? Sure, it's a holiday and a celebration, but we don't shoot off fireworks at Christmas, or Halloween, so why do we do it on the 4th of July? I'm sure you all know that July 4 is America's Independence Day. But, it wasn't the day we won the Revolutionary War or the day the war was started, it was the day 56 delegates of the Continental Congress signed the Declaration of Independence. It was the day that Britain’s 13 American colonies became the United States of America!

We hold these truths to be self-evident, that all men are created equal, that they are endowed by their Creator with certain unalienable Rights, that among these are Life, Liberty and the pursuit of Happiness.

In a word freedom! Not just freedom from Britain, but a new freedom, a freedom we would make our selves, which no person or government could ever take away from us! And while the creation of this country and its freedoms is definitely something deserving of fireworks, it still doesn't quite explain why they are such a symbol of the 4th of July.

I think the main reason for our country's use of fireworks for 4th of July celebrations is our national anthem: The Star-Spangled Banner.

The Star-Spangled Banner was written by the poet Francis Scott Key during the War of 1812, which also happened to be with England. We at the time were a very new country and certainly not the super-power that England was. Nevertheless, we were still ready to fight for our freedom! The song that would become our national anthem was written during the Battle of Fort McHenry in the very middle of the war. He and John Stuart Skinner had gone to make arrangements for the release of some American prisoners, but after overhearing plans for that evening’s battle, they were forced to remain captive on a British ship until morning. You can imagine how they felt, by listening to the first and second verse of the song and imagining what it was like to be the heat of battle, captive, on an enemy ship.

When the sun went down the American flag was flying above the fort, but once the lights from the barrage of bombs had stopped, there was no way for them to know whether or not the British had succeeded in taking over the fort, till morning's first light shown on victor's flag flying from the battlements.

Oh, say can you see by the dawn's early light
What so proudly we hailed at the twilight's last gleaming?
Whose broad stripes and bright stars thru the perilous fight,
O'er the ramparts we watched were so gallantly streaming?

In the dark, the explosions from the ships' cannon fire and the return fire from Fort McHenry would give just enough light to see which side had control over the fort.

And the rocket's red glare, the bombs bursting in air,
Gave proof through the night that our flag was still there.

But once the bombing stopped for the night, it would have been completely dark on the shore and impossible to see what was going on from their ship. Who had won? Who now controlled the fort? Did America's flag still fly? Or had the British flag replaced it?

Oh, say does that star-spangled banner yet wave
O'er the land of the free and the home of the brave?

Then as the sun slowly rose, its light revealed the answer!

On the shore, dimly seen through the mists of the deep,
Where the foe's haughty host in dread silence reposes,
What is that which the breeze, o'er the towering steep,
As it fitfully blows, half conceals, half discloses?

Seeing the American flag waving in the morning sea breezes, it must have been amazing! They had held the fort; the battle was won!

Now it catches the gleam of the morning's first beam,
In full glory reflected now shines in the stream:
'Tis the star-spangled banner! Oh long may it wave
O'er the land of the free and the home of the brave!

That is why there are fireworks. They invoke the feelings that this country is built on. We fought for freedom and we won, not just once, but many times, through many years and many wars. And we will keep fighting for our freedom and the freedom of our children until the end of time if need be. And celebrating that freedom is something that totally deserves fireworks! 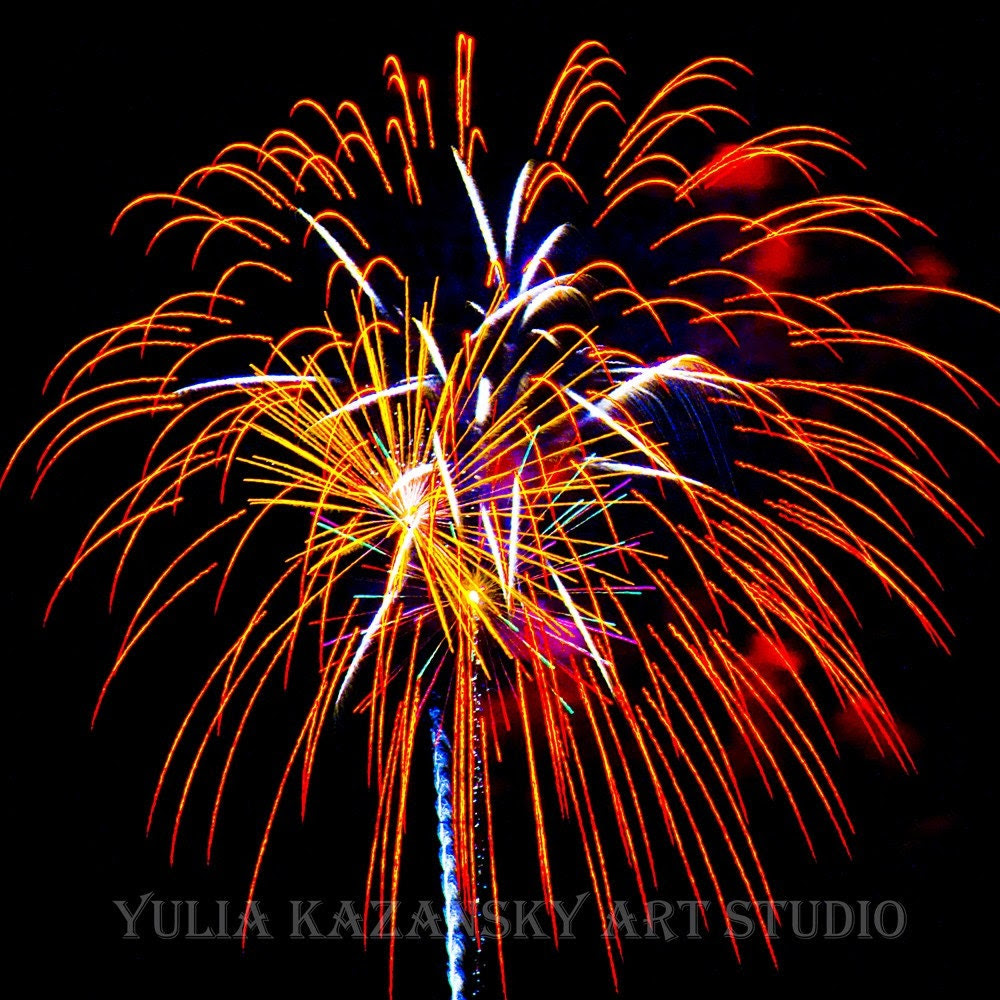 Happy 4th of July everyone! :)